The Complete History of the Universe: A Personal Journey

I’m going to start with this picture, because the owl is cute and the message is good. 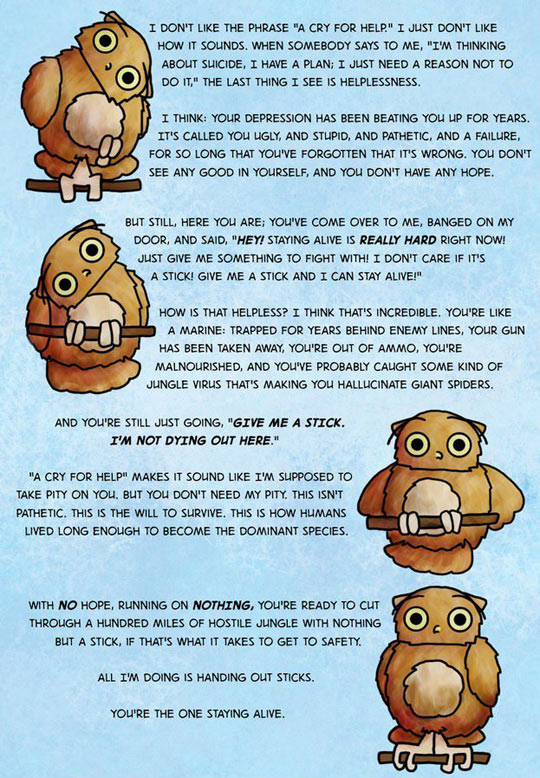 The loss of Robin Williams is a tragedy by any reasonable use of the term. However, the silver lining is that it gives us all an excuse to talk about a subject many of us try to avoid: depression. I’m going to be linking to some things I’ve read this week that showed up on my facebook feed following his death, but the most important link is the National Suicide Prevention Lifeline. That’s your stick supply, in case you or someone you know needs it.

Looking back on it now, I am unsure whether my own emotional struggles deserve the term depression, although I think they do in some cases. I’m not a qualified mental health professional; I know little about it other than it hurts. Several members of my family have suffered from more or less severe mental illness of varying kinds, but I am not here to talk about them.

I’m here to talk about me, and my own experiences.

When I read this article on Cracked on why funny people kill themselves, I saw a hint of who I could have been. The article describes how the weird kid starts being the class clown because nobody likes him and laughter is a positive reaction. I think I could easily have gone that route, except I was homeschooled starting in 3rd grade (I may discuss the pros and cons of homeschooling later). I honestly don’t know if I really had friends before then, but it didn’t take long after before I had basically none. Perhaps I would have preferred loneliness to being the clown, but I really have no way of knowing.

I think I first started experiencing depression about the time I hit puberty. The combination of an isolated environment and the hormones from my monthly cycle caused me to fight suicidal thoughts almost every month just before my period hit. I’m not sure when that started; I only know it has never completely stopped, although it was worse before college. In other words, before I found a group of close friends.

It is worth noting, however, that finding friends wasn’t enough.

I came across this post on 5 things Christians shouldn’t say to depressed friends. (This seems like a huge leap, give me a bit to explain.) While the things listed are truly awful things to say, the suggestions of what to say instead refuse to recognize a simple fact: Christianity can cause or aggravate depression.

I know it’s a rough pill to swallow. It took me living through the experience to realize it.

Letting go of the guilt of constantly failing to be good enough for an alleged god was probably the single biggest thing that helped me out of my struggles with depression.

You can assure someone all you want that god totally loves them, but when they have struggled for years, doing everything they can, just to get through the days and they know god could fix that without any trouble at all and just refuses to for reasons nobody even tries to explain, that rings pretty hollow. Why is this loving god never there when someone needs him? That’s the question born of my experience.

Christianity ingrained me with the idea that I was broken from birth with Original Sin. It taught that I was inherently not good enough.

Every month, almost like clockwork, my body stops producing a chemical I need and/or starts producing one I don’t. I’m not sure that I’ve only experienced depression symptoms as part of my menstrual cycle, but that seems to be the biggest factor. Some months, especially during the summer or when I’ve spent a lot of time outside or at least outside myself (caring for someone else, socializing), I barely notice this. Other months, I stop being able to function almost entirely.

These are some of the thoughts I have:

“You’ll never get what you want out of life.”

“You should just give up.”

I’ve been to therapy before, and it seems to help for a while. I think I stop feeling as though it is helping after a time because I think I’m saying the same thing over and over, but I’m not sure.

Although I don’t believe in literal evil spirits, the thoughts that come when I’m depressed feel like a struggle with a demon. I remember the first time it felt as though suicidal thoughts came as though from outside myself. It was like hearing a voice say, “You should kill yourself.” It was odd at the time because I thought I was happy right then, or at least that things were going fairly well. My religious self would have (I think did?) interpreted the episode as a demon attack, and not a very well executed one, at that. My atheist self, well, I’m still not quite sure what to make of the incident! Mostly, I just assume my brain was fucking with me.

The religious causes of my struggles grow easier to deal with over time, but I’m not sure I will ever entirely get over that indoctrinated feeling of being inherently so bad as to deserve eternal torture just for existing.

The physical causes of my depression, if it is that, probably won’t go away until I run out of eggs, if even then. The hard part is realizing when it’s coming and trying to do something to stave it off, rather than closing myself at home and hissing at sunlight like I usually do. I always notice when it’s just about over what has just happened, and very rarely do anything ahead of time.

Other causes come and go. This week, I’ve been blaming the fact that where I am in life and where I want to be are two very different places. I’m working a job I don’t particularly like to pay bills I don’t think I should have (referring to my student loans, mainly; all others are more or less completely my fault) while trying to also work a job I want to be passionate about (this blog). Yet, I can’t bring myself to be passionate about it, and I’m not sure why. I want to do this; being a writer is the one thing I’ve always wanted. The motivation, however, of working for myself after working for someone else all day… that’s almost impossible to find. Probably, this has a lot to do with my income-giving job being mental rather than physical work. My brain is tired when I get home most days.

In a sense, there is a vicious cycle at work in me. Writing helped me a lot when I had no other way of dealing with depression. Without depression, I almost can’t write. With too much depression, I can’t do anything.

I’ve completely lost track of my point, I think, if I had one, and I’ve served enough word salad for one day.